It's almost the end of August and we have just arrived back in Regina from our summer in Ontario - besides the Graceful Mandala and changing the name and logo for the shop, what have I been up to this month?

As mentioned in this post, I have been planning for a while now to expand the items in my shop beyond just crochet, to include wire and glass jewelry. So when I was packing for this trip I made sure to grab my wire jewelry tools and supplies. Unfortunately I forgot some of the supplies, so I was limited in what I could create during the trip. I made a few pairs of earrings, and a bracelet. I spent a couple of mornings taking nice photos of the new pieces, and posted the new Etsy items just before I changed my shop name.


The jewelry selection still feels pretty sparse and I will definitely want to add some more items now that I am back home, but it's a start for now. I'm also planning to order some coloured stainless steel wire (it's much stronger and more durable than copper), and I may also branch out into silver wire and semi-precious stones. I'm looking forward to working on this more over the next couple of weeks now that we're home in Regina.

Rainbow Converse Booties - A Pattern and a Colour Variation

This month I finally finished writing up my pattern for the Rainbow Converse booties. I was really impressed with Etsy's new instant download system for PDFs when I posted the Golf Club Covers earlier this summer, so I wanted to do the same for my converse booties pattern.

I've actually had the pattern mostly written up for a long time, but I knew there were several tricky parts where a picture would be much more helpful than a written description. So I wanted to include lots of pictures - after fighting with formatting in Word, I ended up with over 30 pictures embedded in the pattern. I also included a text-only version of the pattern for those who might want to print out just one or two pages, or display it on their phone or tablet. It sure took a long time (and quite a few fits of swearing) to get the formatting to work right, but I'm really happy with how it turned out.

I have also finally gotten around to making an inverted colour variant of these booties - with the red at the top instead of the bottom. This is usually the way I prefer to see and make rainbows, and I'm really not sure why I made the original booties the opposite way around. Here are the two versions (original on the right, new on the left) - I can't decided which I like better. What do you think? In any case, both versions are available in my shop!

At one point during this trip we stopped to get coffee at a local coffee shop, and I noticed that even when using one of those little cardboard bands around my cup, my London Fog (a delicious tea latte made with Earl Grey tea and vanilla, for those of you who haven't tried this magical beverage) was still almost too hot to hold. This got me thinking that a crocheted coffee cup cozy would be much more effective - plus it would be reusable, and stylish!

Later that day at the beach I started a prototype. I started with a chain that I joined into a circle, and did continuous rounds of single crochet (double crochet would have been too loose and wouldn't protect the hands as much I think...), adding a few increases every few rounds to make it slightly wider at the top. This first prototype was about the same height as those cardboard tubes in the store. Later when I went to make the second one, in a different colour, I decided to try making it taller so it would be more comfortable to hold. Here is the comparison of the first two versions: 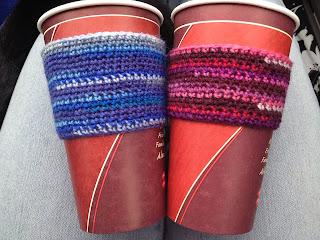 I asked my Facebook fans about which they liked better and the consensus seemed to be the taller one (as I suspected), so I kept that size for the rest of the colours. I had to pick up a few more types of sock yarn to make a nice selection, plus, I knew I wouldn't have Len's Mill Store once we got back to Regina - I had to take advantage of their selection and prices while I could! Each colour is a slightly different weight and stretchy-ness of course so I had to keep checking each new colour against the finished ones, and testing it out on a trusty Tim's cup.

I also played around a little bit with an adjustable model of the coffee cup cosies, for use on mugs with handles and strangely sized mugs... I will probably come back to this idea later. For now I like this simple one-size-fits-all model. Here are the colour combinations I have made so far, all available in the shop:

I have continued to work on the knitted square blanket from this post, though it's been out on the back burner during these other projects. I just finished the second piece - doesn't it look nice so far?. 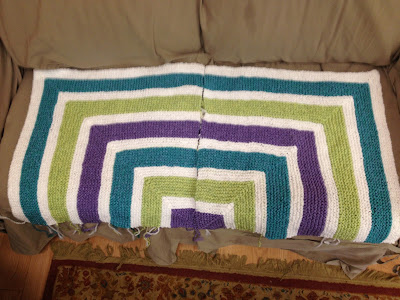 Ah well, it's not for the shop or a gift, it's just for me, so I think it's fine to leave on the back burner for a while. I will probably be more motivated to work on it once it's a bit chillier. I'm sure the ladies at my Saturday stitch group will be happy to see me knitting for once (I'm in the minority as a crocheter) - plus they can help save me when I inevitably mess it up again!

Another project that I brought with me this summer is a lovely pattern made in amazing baby Alpaca yarn that my in-laws gave me for my birthday last year (that would be September 2012 for those keeping track). I didn't get a chance to start working on this sweater until Xmas time last year, and it has been a sort of in-between project: something that is easy to pick up at any time, and fits nicely in a small project bag so it's easy to keep with me, but it hasn't gotten any concentrated attention from me to this point.

It's been the same on this trip - I've worked on it from time to time, but I haven't focused on it at all. I put a stitch marker in at the start of this trip, and now, when we've just arrived home, you can see that I've certainly made some progress, but not a lot. 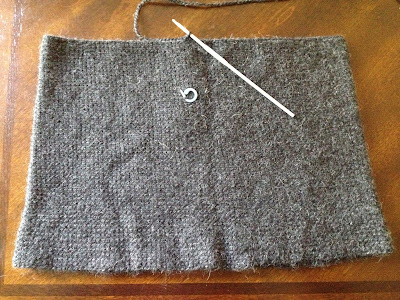 In my defence it is very fine yarn and a 3.00mm hook, all in single crochet, so it does take forever to do each round. I will need to get going on this soon though, if I want to wear it this winter! I promise a more thorough post about this project and pattern when it's closer to completion.

That's it for now, keep crafting!
Posted by Crafty Chris at 09:11 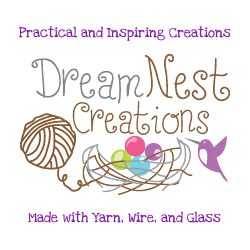